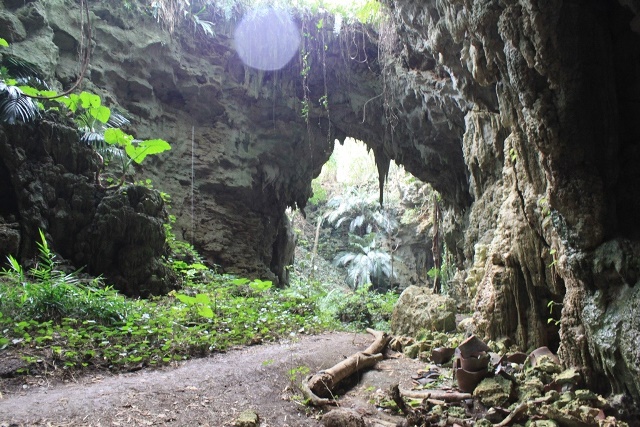 The Yajiagama Cave system is located in the Western part of Kume Island and delves extensively under the surrounding area. From the entrance, the cave goes along an easy to follow path until they open to a beautiful area open to the outside.

From this open area there are two more paths that lead to different exits. These other paths are usually closed due to wet weather, though if you travel with a local or a guide you might find a way through. Most people choose to return the way they came from this area.

Along the first stretch of caves are two interesting rock formations. As you can see, the picture on the left shows what is eerily similar to a woman or monk praying or meditating. The lighter area could be the face while the darker brown would be the hair, flowing down to shoulders.

If you visit after rains there may be a pool of water just before this formation. Don't worry, there's a metal walkway that crosses over. You can use the water and a flashlight to really bring the formation alive with an interesting play of colors. 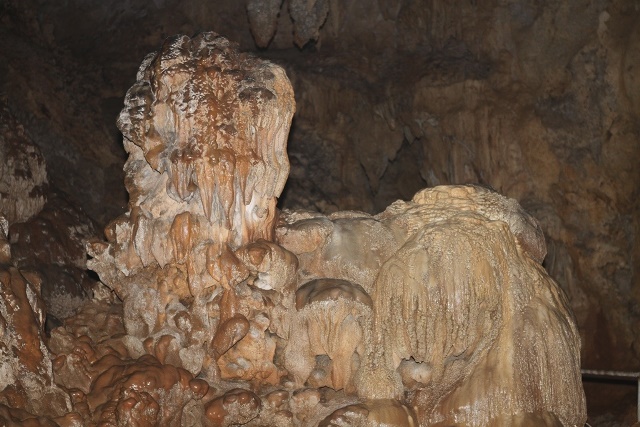 The other rock formation follows just after and is in the shape of a shisa, an Okinawan protector spirit.

Throughout the caves there are places where the walls seem to glitter if you shine a light just so. You might also spot small bats along the way!

In the central area and both entrances, you might also spot a quantity of clay pots, many of them broken. You might also notice that many of them contain human remains. In Okinawan culture, it is common for bodies to be cremated or buried in ohaka. You'll see many of these house or oval shaped tombs built into cliffs or caves. During a time of sickness over a hundred years ago, there was no ohaka large enough for all who died, so they were placed in the caves. Today you can still see the types of pottery used and even some of the remains as earthquakes and storms have damaged some. Some Okinawans offer money to the spirits to pray for them, while others avoid the caves altogether. 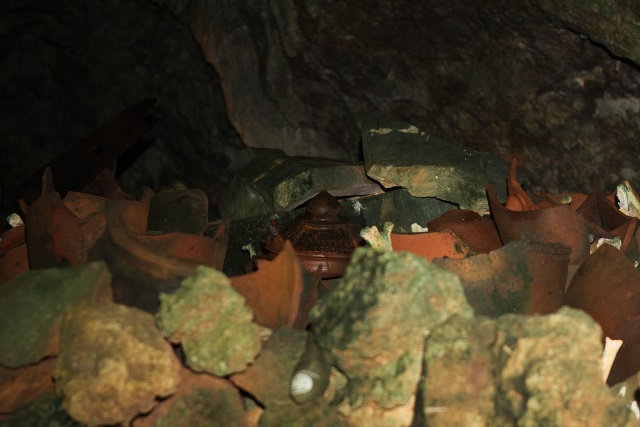 There is often a guide available to lead you through the caves from around 12:00 to 4:00 that carries lights. If he's not around you can still enter but make sure you bring your own lights and are very careful. Also be aware that habu, a type of poisonous snake on Kume, might seek an escape from overly warm or cold temperatures in the caves. 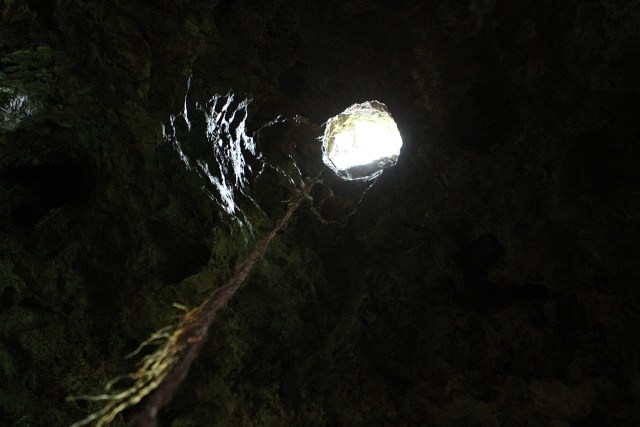 A skylight opens at the main entrance to the caves, with roots stretching towards the ground.