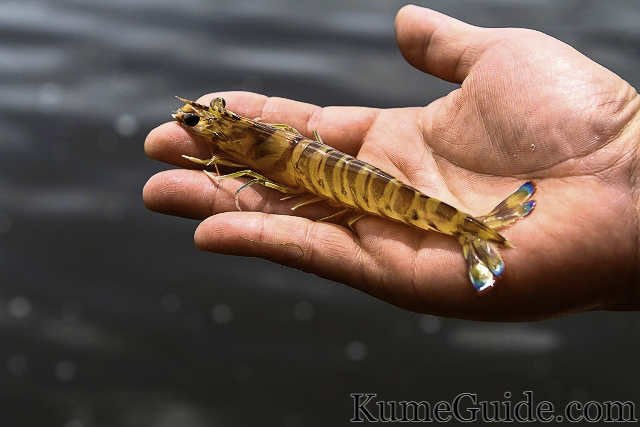 One of Kumejima's most well-known products in Japan are the large Kuruma Prawns (aka Kuruma Ebi, aka Penaeus japonicus) it produces utilizing the mineral rich deep sea water from the local Okinawa Deepsea Water Research Institute. The prawns provide an important and delicious source of income both for domestic and international consumption. The deep sea water helps Kumejima's shrimp grow healthier and tastier in protected farms around the island.
You can differentiate Kuruma Shrimp from other tiger shrimp by the distinct blue hue in their tails. Before cooking the prawns are nearly translucent with stripes similar to Tiger Shrimp. Once cooked, high quality prawns turn a deep red. 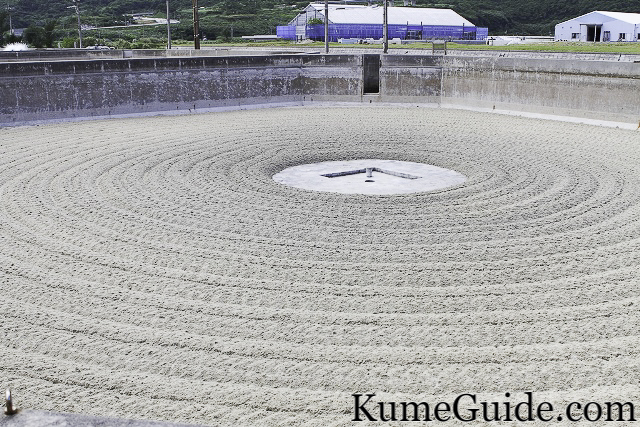 The shrimp are initially hatched at a centralized location near the research institute before being moved to the various farms. The photo to the left shows a breeding area. The prawns make their homes in the sands at the bottom. The sand is prepared by loosening it with farm implements before deep sea water is added. The reason they are hatched separately is so that population-damaging viruses from the ocean are avoided. Since mineral-rich deep sea water is used, the baby shrimp are healthier and tastier. 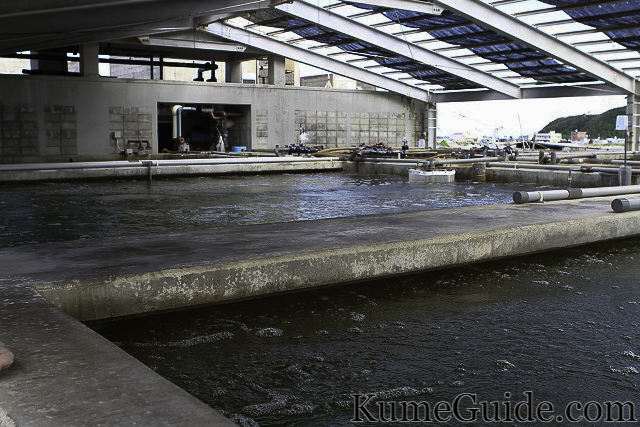 Once at the farms, the prawns grow until they are ready for sale. With such fresh product, they are sometimes even served as sashimi (raw) on the island, though the most popular method is to grill them with a little salt.

One of the Kume Island shrimp farms is Epoch, located in the Aka Area. In order to provide the most delicious product possible, the shrimps are not produced year-round. Instead, there is a yearly cycle. Starting in June, all the water is removed from the prawn farms and the sand at the bottom is exchanged. At this point, prawns that were not harvested throughout the previous year are collected. Exchanging the sand yearly is a tough and expensive process, but important for producing the best quality prawn. This process allows prawns to build new burrows in which they will find minerals. If the sand is not changed the prawns will have a softer color and less taste. The shrimps are produced at the local hatchery near the deep sea water institute in September and after growing will be transferred to the shrimp farms. Around 400,000 shrimp are put in each pool. With 3 pools that is almost 1.2 million shrimp.

The shrimp grow slowly in the cold winter months, yet they have a better taste and more amino acids than prawns grown in the summer where they grow more quickly. This is why the shrimp are harvested in a cycle. To ensure the highest quality, Epoch feeds the shrimp daily with a proprietary mix of vitamins, squid, ground fish and other ingredients from the mainland of Japan. The food ensures a better color for the shrimp, but is a large cost as well. Every day, divers patrol the pools to ensure the shrimp are eating bait and that no garbage has entered from the sea. They also exchange the water each day to ensure new minerals and a healthy environment.

Since shrimp are active at night, traps are set out around the tanks at night. Inside the tanks are bait and lights that attract the shrimp. A simple funnel net allows them to enter, but keeps them from escaping the other end. The size of the holes in the trap allows undersized shrimp to escape and grow larger. In the morning, the traps are hauled up and the shrimp are transferred to directly into cold water containers where they go directly to the processing facility just a few meters away. The shrimp hangout in cold water that keeps them fresh and healthy throughout the quality process.

At Epoch, the shrimp are sorted twice. First, they are sorted by size so that only shrimp of the same size make it into the same box. Next, prawns are checked for damage. Any damaged prawns do not become part of a live shipment. Occasionally, a few soft shell prawns are found. These prawns only occur in about 1% of the population and are extremely rare and popular. Soft-shell shrimp can be eaten whole even by those who do not usually eat shell-on shrimp. 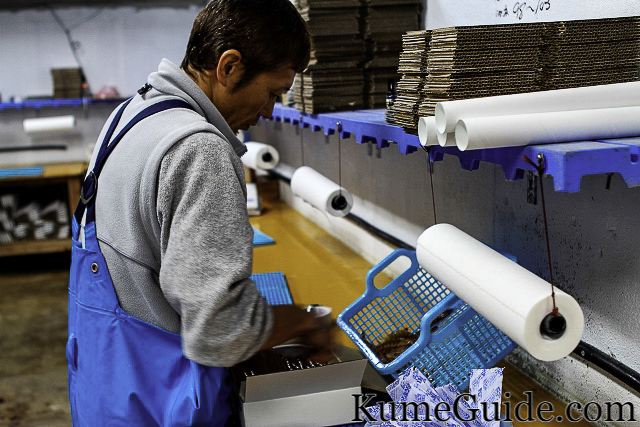 Once sorted, the shrimp are weighed and boxed with a cool pack and paper to protect them during shipment. The shrimp can live two to three days if kept cold, and can thus be shipped live around Japan. Most Kumejima Kuruma Shrimp are sent to Tokyo and other markets where they are auctioned for use at high-end restaurants. Shrimp are also flash frozen for distribution during non-peak seasons. Live Shrimp are especially sought for esebo or gifts given at the end of the year, which co-incides with their growth cycle. They are so fresh and delicious, and one of the few sea products that can be delivered live. 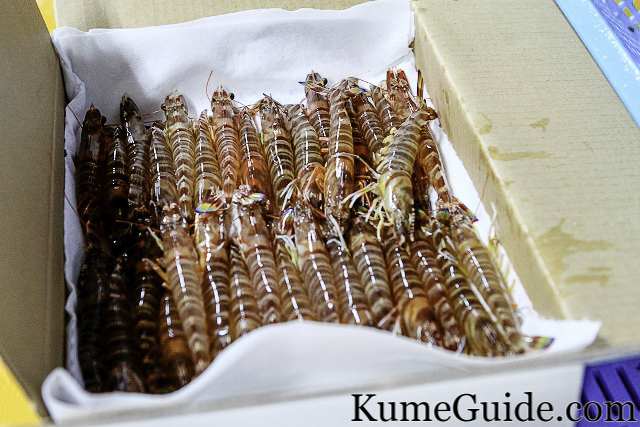 Epoch Kuruma Shrimp are at the highest level of quality. Many farms throughout Okinawa also produce the same species, but the close proximity to deep sea water, the careful control and protection of the species and high quality control allow Epoch to produce truly superior shrimp. Kuruma Shrimp are available on Kume Island at the major hotels, or you can contact Epoch directly to make an order. The price of Tiger Prawns depends on the size and weight, but average between 3500 and 5000 yen for a half kilogram.

These shrimp taste so good even the occasional bird steals a bite.