Miso is a staple in almost every Japanese kitchen. Like all major foodstuffs, each household would make miso for their own use. Miso was made in this manner up until just a few generations ago. As the family miso fade, a few of the best local recipes have taken the place of all those individual sources.

There are now several Miso Factories on Kume Island, some of which are quite famous in Okinawa for the great tasting miso they produce. While the factories are not generally open to the public, their products can be found throughout Okinawa, but especially at local stores like Oroshi Supermarket and the airport.

Luckily, I was invited to the Aguritto Factory to view and record the process they use to make the Fujiko Oba- (Grandma Fujiko's) brand miso for miso soup. The company also makes other interesting sauces and seasonings great for a variety of dishes.

Great miso contains only four main ingredients: steamed rice, soybeans, salt, and koujikin. The final ingredient is the magic that turns regular rice and beans into something completely different. It is also the catalyst used in sake. Koujikin (麴菌) is a fungus that acts to ferment the basic ingredients. Miso is essentially fermented soybean paste.

Miso is not continuously made throughout the year. Since it is a fermented product, it is relatively stable with a long shelf-life. Miso can also only be made in temperate seasons since temperatures too high or low can effect the fermentation process. Large batches of miso are made a few times a year when they are needed. 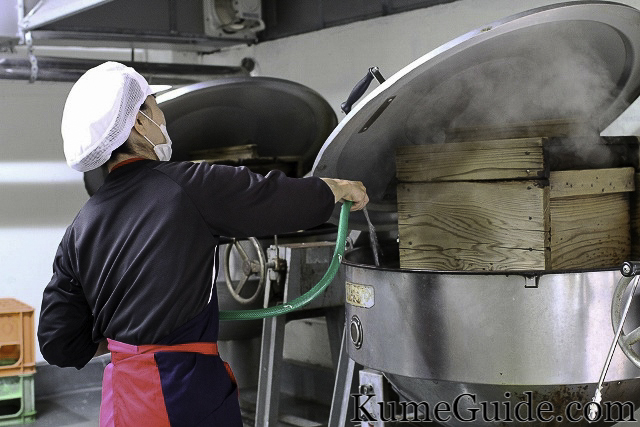 The first step in creating miso is steaming rice. At Aguritto they use two large boiler/box steamers to steam 35kg of rice in two batches. The rice takes about two hours to steam, after which it is removed to large wooden trays with blankets used as water absorbers and linings to cool. These blankets replace the rice stalks that were traditionally used. Once the rice has cooled, the koujikin is added. The rice is bundled into the blankets and left to dry and ferment for two days. 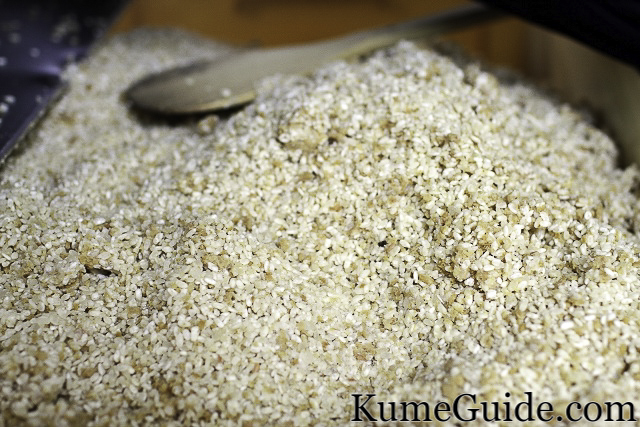 The second day of work on a miso batch starts three days after the rice is cooked. Roughly 2/3 the amount of beans are used in relation to the rice. they are also steamed then cooled. The beans are sent through a large grinder to process them. The fermented rice is also removed from storage and broken up into manageable batches.

Once everything is prepared, each rice batch is added to a drum mixer with salt and a measure of the processed beans. Once everything is well mixed, it is packed into containers and sealed against the air. These packages are left in a dark area for two to three months to ferment. 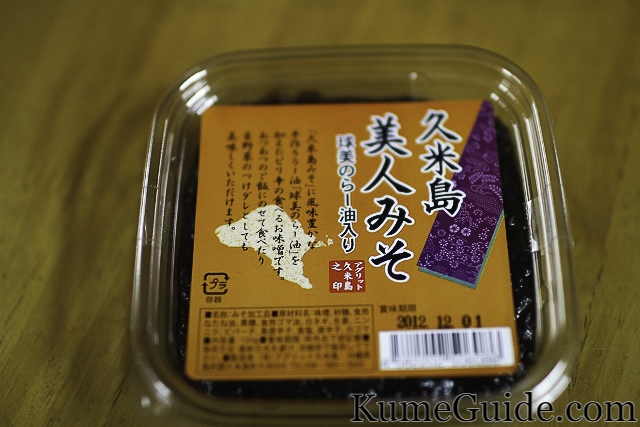 There are many kinds of miso, all with different purposes. The color and flavor of the miso changes with the time allotted for fermentation. The miso made in the video below is for soup and will end as a light brown. The picture to the left is a much darker version used in cooking that has fermented far longer.

Aguritto's miso is just one of several companies that produce miso on the island. Some households still make their own since it is a simple, if time consuming process. This company has only been making miso for about two years, based on Fujiko-oba's recipe. I made an advanced miso soup recipe that turned out very well, and I can attest that local will likely beat out the major brands any day.