六月ウマチー
The Umachii Festival, also known as The Sixth Month Umachii takes place on the 25th of the sixth month of the old lunar calendar (kyureki). This festival celebrates the happiness and appreciation of the harvest. The Chinbei (high priestess) exchanges the white robes worn during Tsuma for more brightly-colored cloth. Along with the bright robes, the Chinbei wears magadama (prayer beads) around her neck and a crown called michabui or kabui made of lilyturf grass grown at Chinbei Dunchi. The other priestesses (noro) wear headdresses made of ferns called Hobikanju. The priestesses start facing east. This is to pray to the kami at Shuri from afar, then turn to the main shrine to pray for this and next year's harvests.

After the initial ceremonies, the Chinbe visits religous sites in Nakachi and Yamazato with her noro. Along the way she is escorted by four fan-toting children. At the Nakachi Guwaccha (the Guwaccha is the historic site of local rice store houses), the Chinbei leads toasts with the local priestest from Nakachi. This ritual is repeated at other historic sites around the island. Guwaccha literally means 'under the store house.' In the past, rice stores were raised to protect them from small animals and floods. Today, no store houses remain, but the sites were so important to Kume Island's historic residents that the places are still remembered today. 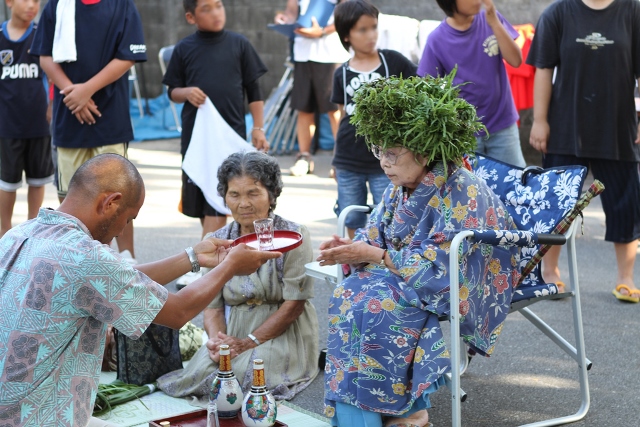 At the Guwaccha, the Chinbei is served sake which was once used solely for purification. Although rice is no longer grown on Kume Island, the this ceremony was always performed before the local rice storehouse. The point of the ceremony is to thank the kami (Japanese god) for the rice harvest and to ask for another good year. Though she is served glass after glass of sake in an intricate ceremony, the priestess consumes none. Instead, her helper transfers it to a container for later. The offerings consist of at least three small glasses of wine but the offerer(area locals and representatives) will continue pouring until one is returned. It is up to the priestess to determine when a sufficient amount has been offered.

After resting from the travels around to different Guwaccha, the Chinbei and her Noro travel to the Gushikawa Castle Ruins for Gushunkunobui (ascending Gushu) in the afternoon. At one time, the Nishime, Kanegusuku, and Nakachi noro all attended the ceremony with the Chinbei. After arriving at ruins, the Chinbei sits and prays on the Toto rock. Toto is an honorary title for the Chinbe, so the rock where she sits is named for her. It is a flat rock supported by smaller stones.

Changes in the Modern Age

Although Chinbei and Noro were once common throughout the Ryukyu Kingdom, the importance and role of the priestesses has diminished under the influence of mainland Japanese and western culture. Today, Kume Island does not host its own Chinbei and noro, instead a Chinbei comes to Kume Island for these important festival and is supported by local women who help keep the traditions and buildings alive. Traditionally, the Chinbei would travel to all the storehouses around Kume Island. Today they visit about three traditional store houses since none now exist.

Please Note: This page is written based on direct observation, materials in Japanese and English provided by the Kume Island Cultural Center, and interviews with locals. All information and/or text not created by the author is included with permission. Translations are done to the best of my ability but may contain errors.